On July 2nd I was invited to give a workshop at Supermarkt’s event ARTS & COMMONS: Art, Money and Self Organization in Digital Capitalism.

Together with the participants of my workshop, I wanted to discuss the co-creation of artistic work, in the mold of open source collaboration or Yochai Benkler’s term ‘commons-based peer-production‘.

The form was a hands-on collaborative collage workshop to get us on-topic, and give participants a taste of peer-production for themselves, followed by a discussion on how peer production of art is currently being attempted, and what might be necessary to improve and spread the process. 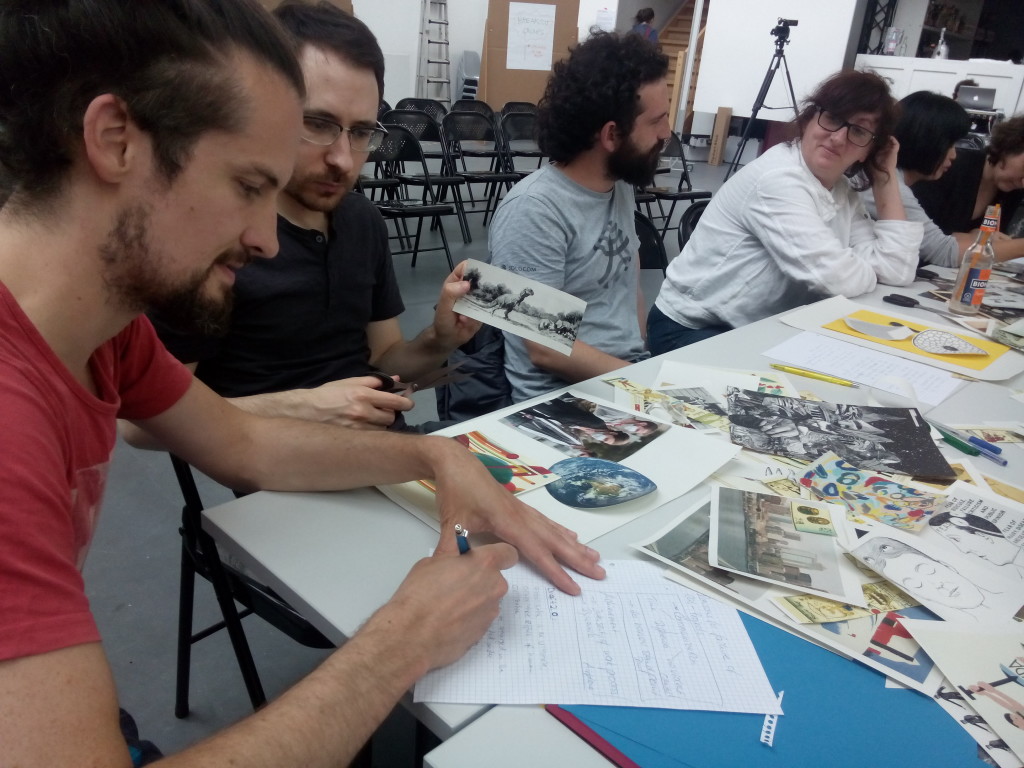 An in-depth recipe for the collage workshop can be found here, but the general concept was for different teams to work sequentially on the same artworks, with the only method of collaboration and communication between the teams being some written documentation, which would accompany the work-in-progress as it moved from one team to another. 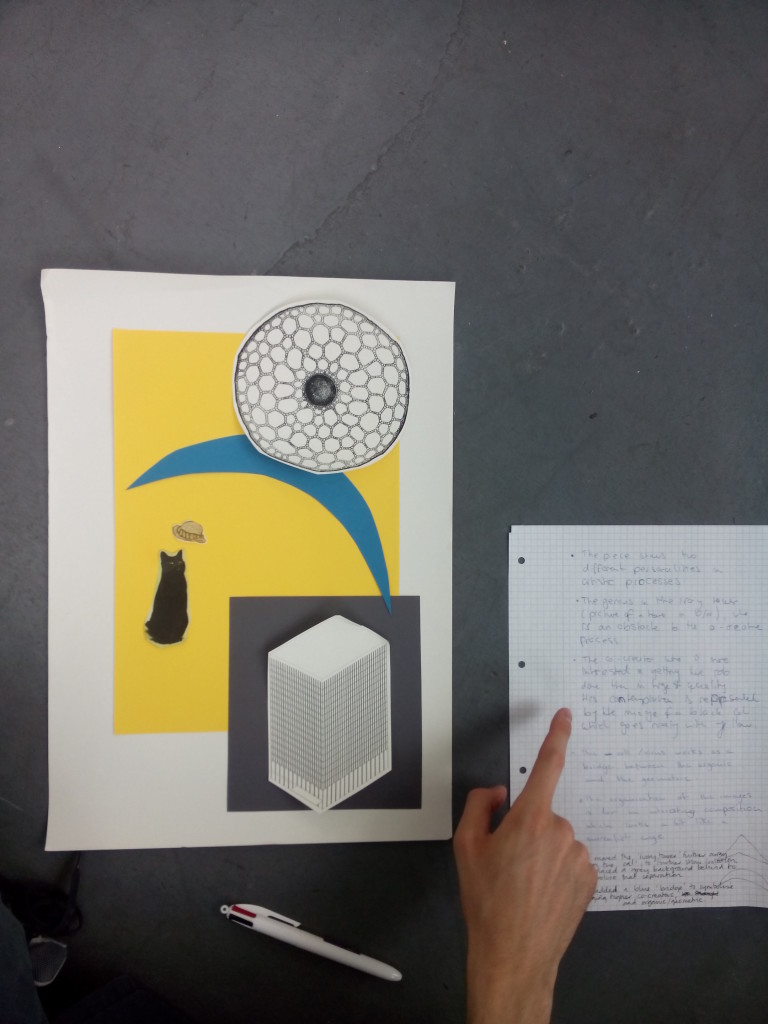 We were building on existing work in the commons – Judith Carnaby and I had put together a collection of interesting Public Domain imagery (printable PDFs here), largely gathered from the Public Domain Review, New York Public Library, and the British Library’s Mechanical Curator.

As we didn’t have enough time to put together a huge collection, this was bulked up with a few pages ripped out of magazines, where we very naughtily infringed the copyright… er, I mean, where we made a provocative artistic protest, striking at the corrupt heart of the copyright industry’s hegemony. Or something. Next time it will be 100% public domain, I promise :) 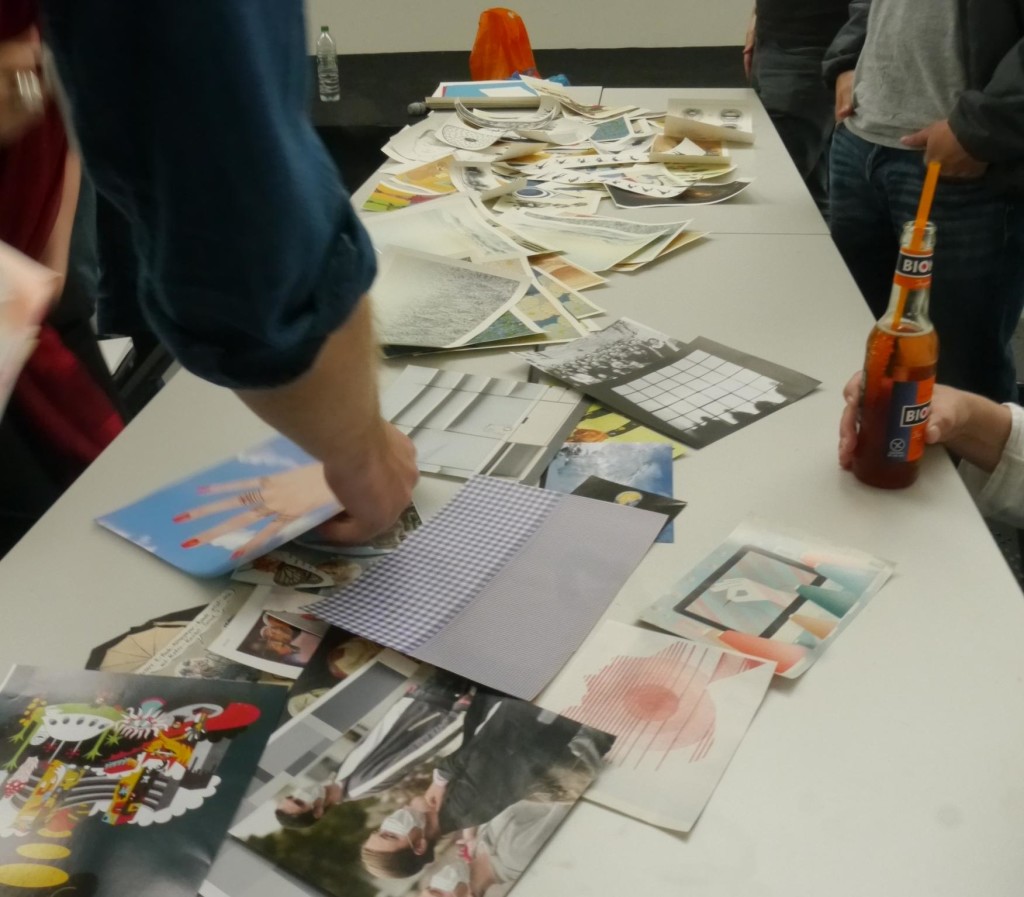 To understand the process, I’ll take you through the journey of one of the artworks as it was created: In the first round, a team would discuss the idea of collaborative art-making, all the fears and difficulties, the insights and unexpected outputs that come with it. They were instructed to dig into the pile to find images which may represent the themes they found important or interesting.

They were then instructed to write documentation explaining their thought process and what they were trying to get across in these choices.

The next team were asked to build on the previous selections – still working on the ideas introduced by the previous team, they added their own ideas and arranged the pieces on a canvas, and documented their work. 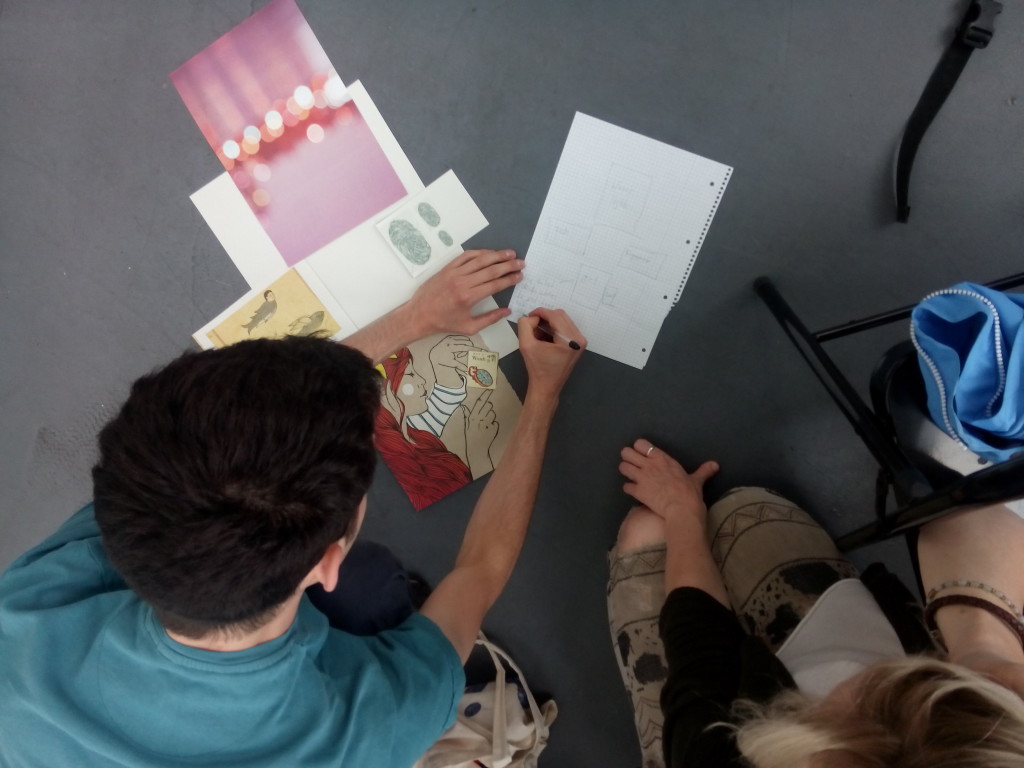 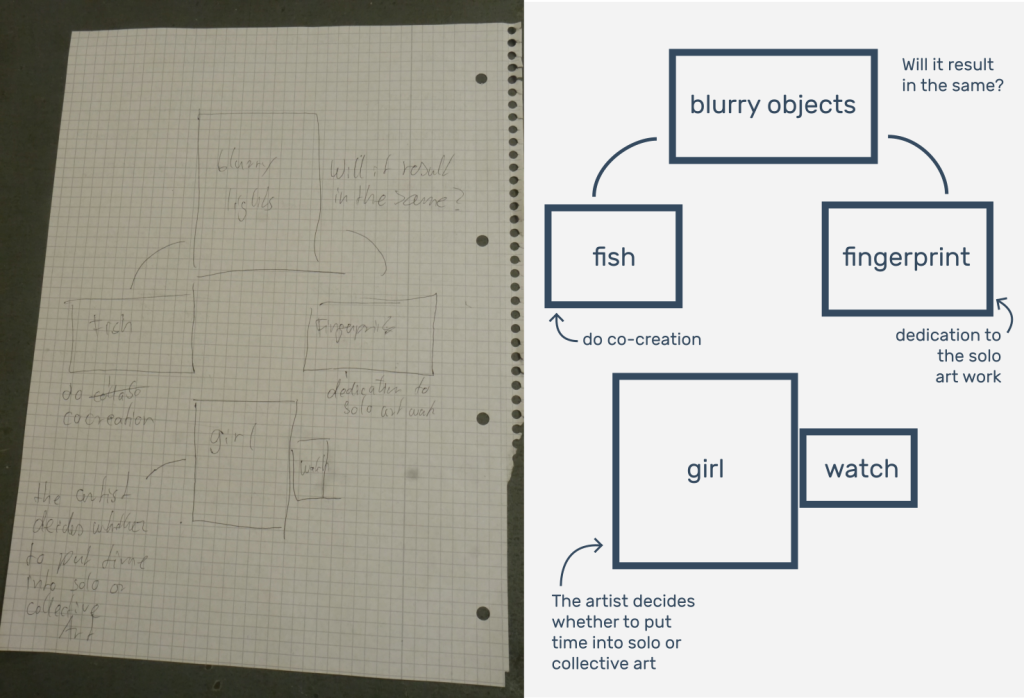 The next team made further choices regarding arrangement, they added in coloured card elements and were instructed to trim, cut or remove something that previous teams had added. 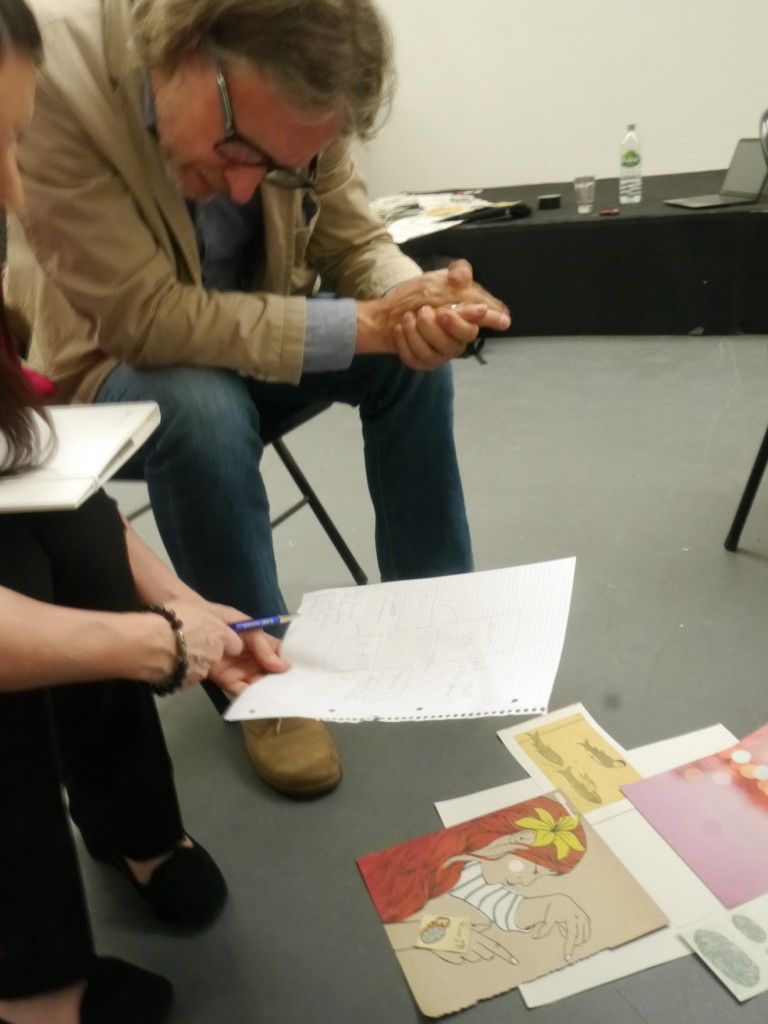 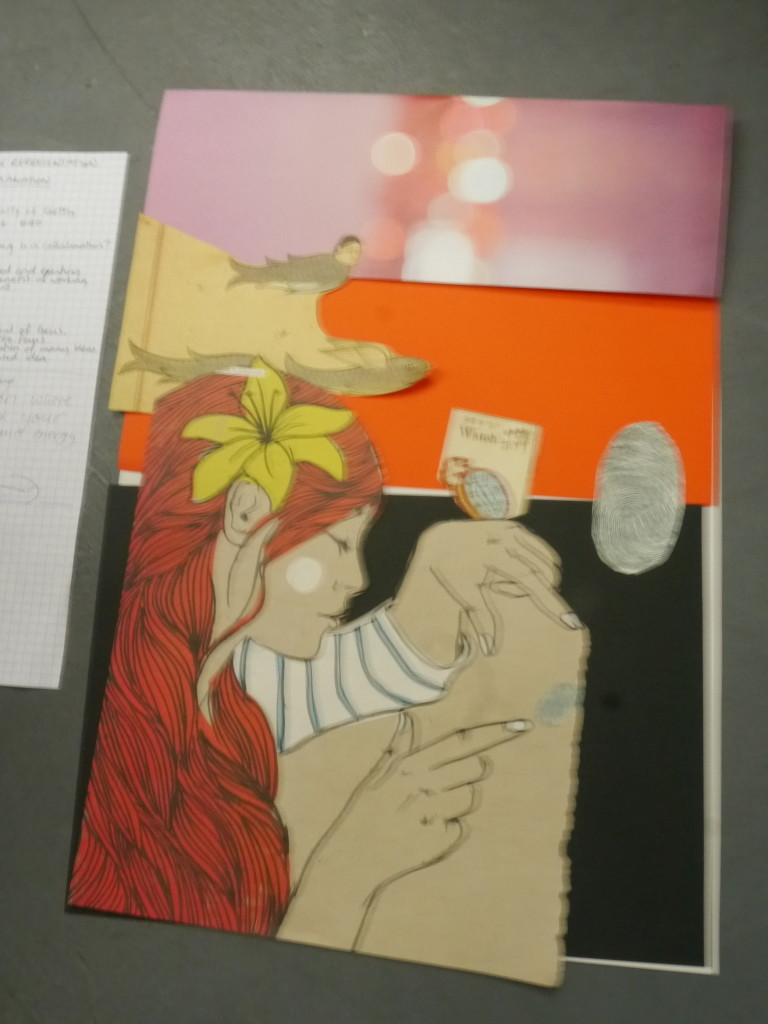 The fourth team, in addition to the creative control that the earlier teams had, was finally allowed to glue! 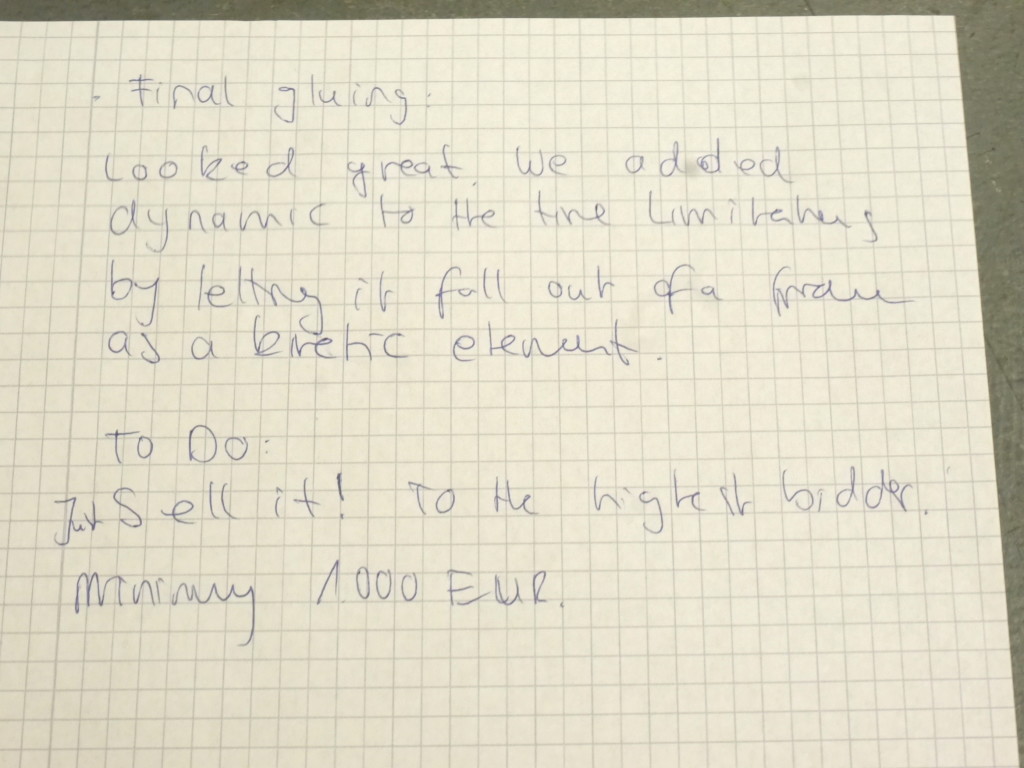 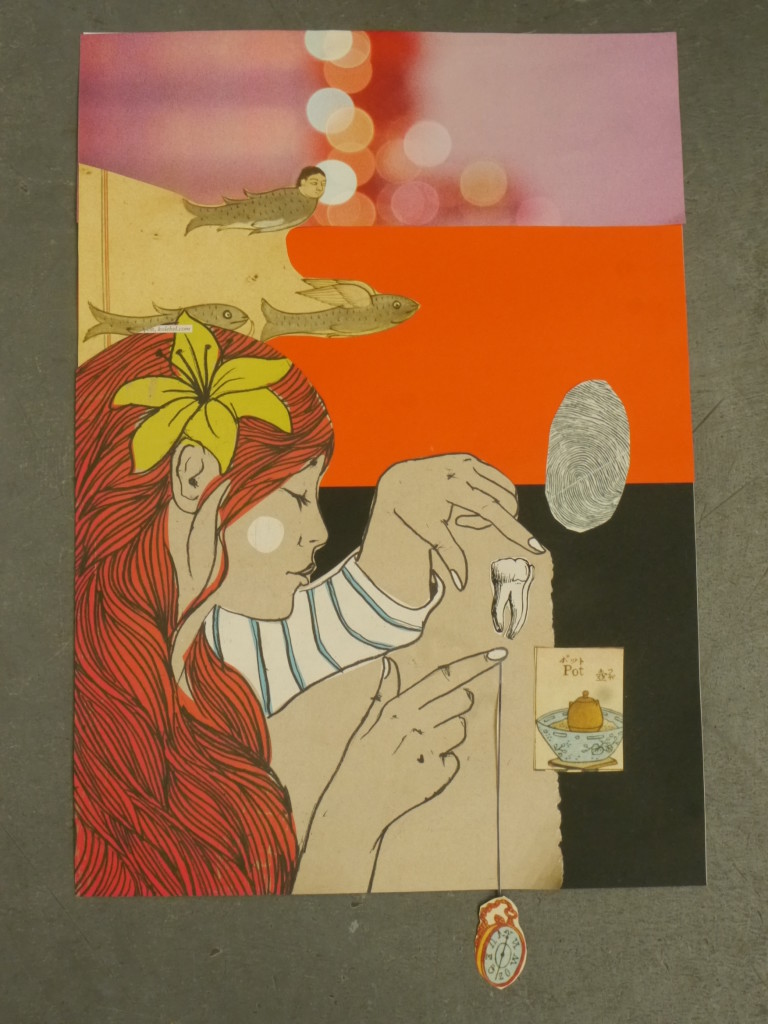 The fifth team had some time to familiarise themselves with the work and its documentation, to make final changes, to present it to the rest of the group, and answer questions on the meaning of the work and topics it addressed. 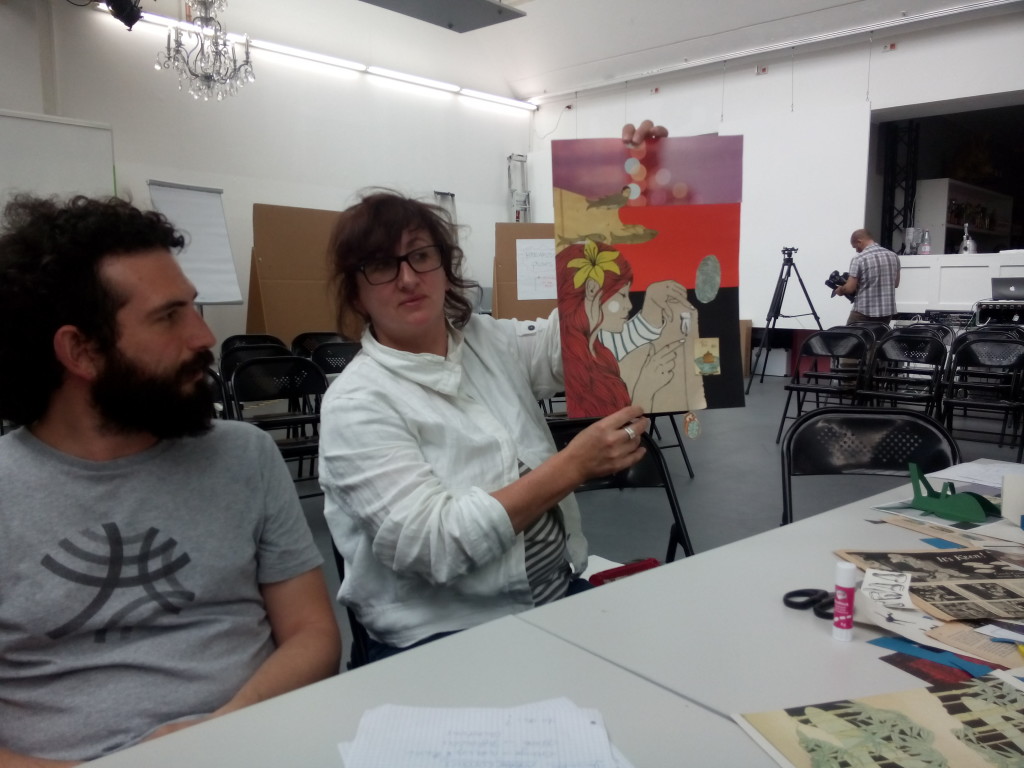 We then talked about how it felt to be part of the process, how much ownership they felt over the works – points of agreement were that participants felt a duty to carry on the work of those before them, but in a good way – they wanted to help the previous teams achieve their goals. Due to the analogue medium and way the process was designed, they felt they had less power to change things, or perhaps fewer creative options in the final rounds – this affected their sense of connection to, or ownership of the work, particularly in the final round when the artworks had already been glued down.

We then discussed the digital realm of peer-production of art, where forking and parallel versions mean that there can be exponentially more options available and many creative directions can be explored by different people simultaneously. You might “glue down” your version, but others can take a copy of your work in any stage of the process, unglue it, change it, and start a new creative branch, evolving in a different direction. 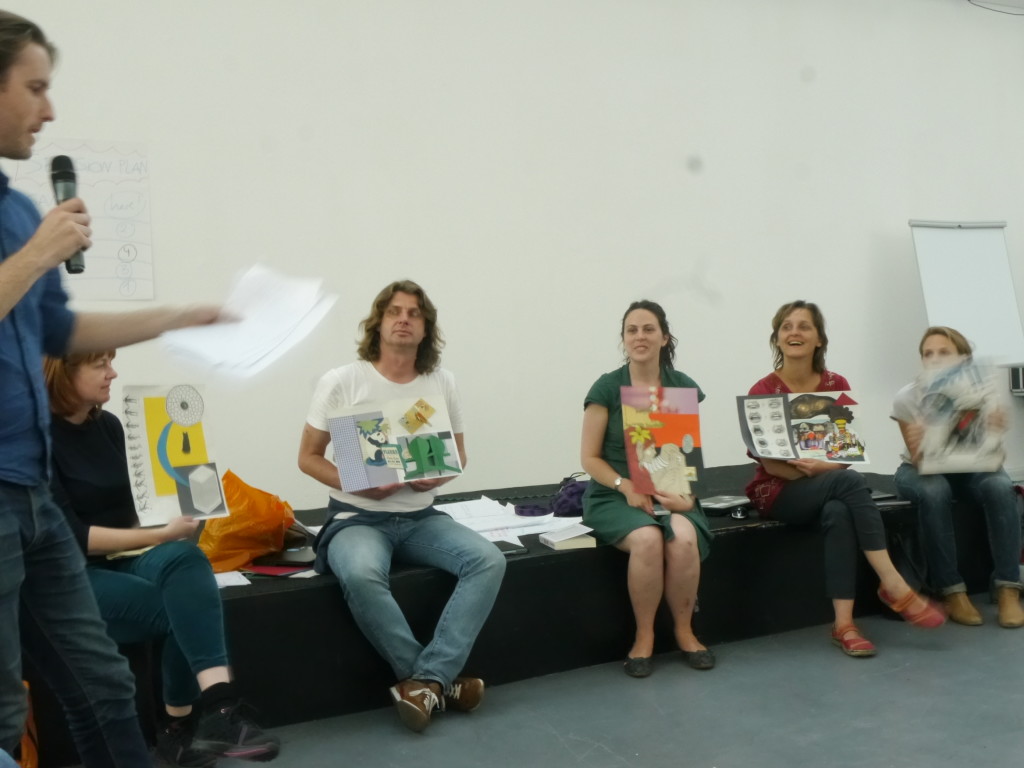 The workshop is still in a relatively unrefined state, but it was very positively received by the participants and I think it can grow into a very valuable tool in time, so please check out the recipe and get in touch with any ideas or feedback. If you try it out, please document your experience and report back!

We also talked about business models for the peer production of art and culture, and I shared some examples of what’s happening in the field already. Here’s just two of the points touched upon:

The Noun Project is a growing collection of icons and symbols under the Creative Commons Attribution license. You can use these for free in your diagrams, presentations, videos, websites, apps, whatever. But you are required to attribute the creator (and preferably link back to the NounProject).

If that’s all too much fuss for you, and you don’t want your perfectly laid out slides or animated gifs to have attributions at the bottom, then you can purchase an individual license which requires no attribution – The Noun Project takes a cut, and the rest goes to the designer.
I notice they’re lacking in symbols or icons for ‘commons‘ – if you’ve got any ideas, please contribute!

Jahzzar (Javier Suárez) has a similar approach. Many free cultural filmmakers use his Creative Commons Attribution Sharealike-licensed music in their videos, and it doesn’t cost a thing… as long as they include “Music: ‘Track name’ CC-BY-SA Jahzzar” in the credits, and as long as they also “Share Alike” – release the video under the same CC-BY-SA license. In fact, I used 8 of his tracks in the POC21 documentary!

Some people may not want to share alike for various reasons, but they may have heard Jahzzar’s music and seen his name all around the web. They can purchase a commercial license, and that’s how his music ends up on big mainstream sites like GQ & the New York Times. Every use of his music either grows the commons (when people share alike), or it earns him money (via commercial licensing). And because people see that he has a wide range of high quality music, they can hire him for bespoke composition too. (Just like we did for Prototype Fund!)

So dual licensing and increased exposure are existing free culture business models for individuals or platforms, but it could go so much further. At the moment, Jahzzar and the designers of the Noun Project are making their work from scratch – not building upon the work of others. Even if they wanted to, there isn’t the infrastructure to do so easily. There have been attempts to allow the sharing of music components, MIDI files and individual loops, samples and instrument recordings for collaboration and remix (like ccMixter) but so far it hasn’t taken off, or at least it’s not a mainstream or widely accepted way of making music yet.

As the artistic and commons community, we should explore the reasons why not, and attempt to improve such projects and make cultural peer production a valid option for many more people.

And although the Noun Project has reached mainstream success, and is creating easy-to-use interfaces for creation and collaboration, it’s still replicating the current ‘proprietary software and in-house collaboration’ model of the status quo.

Imagine instead a platform cooperative Noun Project, owned by the artists, where collaboration is public by default, where files are shared together with their history, components and documentation, and adaptation and forking of designs is facilitated and encouraged.

Anyone can be an Artist / Artists can be Anywhere

One seldom-discussed advantage to the distributed peer-production model is that artists can essentially be based anywhere with an internet connection. 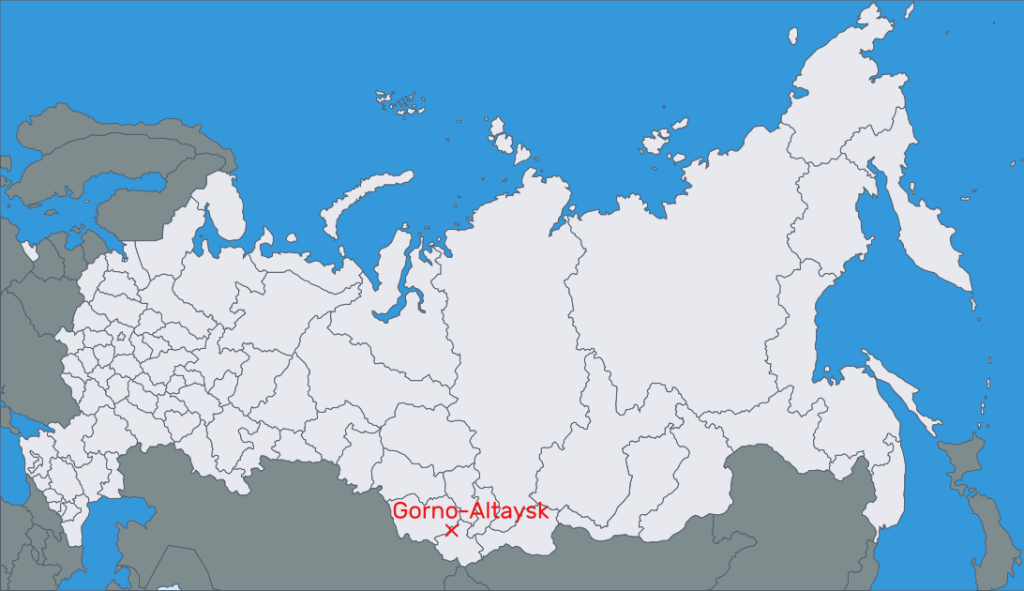 image based on ‘Map of Russian subjects‘ CC-BY-SA Lokal_Profil

Konstantin Dmitriev, who started the anime Morevna Project from a town of 50,000 people in the middle of Russia, provides an example, as explained in Julie Velkova’s paper Ethnography of Alternative Cultural Production (PDF):

The Morevna project was initiated with no financial or institutional support, out of the strong wish of its creator to find a way to exercise what anthropologist Gabriella Coleman calls ‘craft autonomy’, or autonomy to work in frameworks of own making. Gorno-Altaysk, which is Konstantin’s home town, is a geographically isolated post-Soviet city with limited possibilities for self-realisation in the sphere of digital media production, especially animation. Since this is Konstantin’s main interest, he has been trying to find ways to make animated film projects with limited resources and through affordable technology that would be flexible enough to allow for projects of different scales. For Konstantin, Morevna was his way to find meaning and place in the context in which he lives – an act of self-empowerment and proof that he does not need to leave his town, as many others do after finishing school, to find work and professional realisation:

“I want to show that if someone wants to do something – you can do it, even if it is very hard. It is not like – someone can come and tell – go to Moscow. . . . It does not matter that there are no animators in Gorno-Altaysk – they will appear. I don’t want to move somewhere else”

Konstantin has also been helping young people in Gorno-Altaysk to learn animation, both to aid them in their own creative development and help tell their stories, but also to enable potential contributors to his own project. For further reading on this topic I can highly recommend Julia Velkova’s article At the intersection of commons and market: Negotiations of value in open-sourced cultural production. Actually almost all of her research is relevant to the topic of peer production of artistic works.

Many thanks to Carla Schulte-Fischedick for the workshop photos! 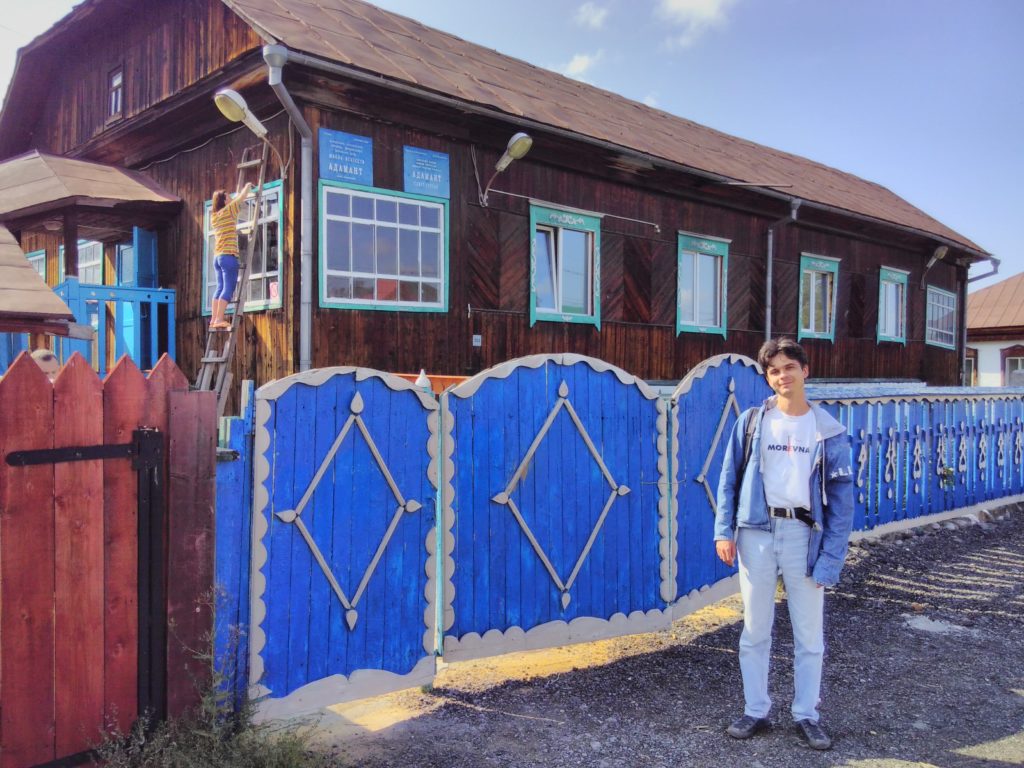 I just got back from visiting Konstantin in Russia! I shot a bunch of video interviews while I was there, and I’ll post the video here when it’s ready. I have also developed the concept for the collage workshop somewhat, and have proposed a more elaborate version for MozFest in October – Cut, Copy & Paste: Use (analog!) open source collaboration to make your own MozFest zine.